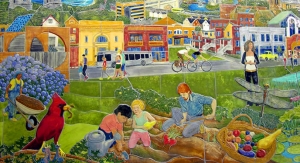 In a recent article published in This View of Life, the distinguished social scientist Anthony Biglan documents the declining quality of life in America and makes a case for a more nurturing form of capitalism. As a rallying cry, he calls for a new Powell memo.

The reference is to a letter that Lewis Powell, a corporate lawyer who was to become an Associate Justice for the U.S. Supreme Court, wrote to a friend at the U.S. Chamber of Commerce in 1971 calling for an organized effort by corporate America to influence legislation and public opinion in its favor. Before the Powell memo there was the Mont Pelerin Society, which formed around the Austrian economist Friedrich von Hayek in 1947 and had the same goal. Both efforts were strikingly successful at molding the current US and world economy through the formation of think tanks and lobbying organizations…