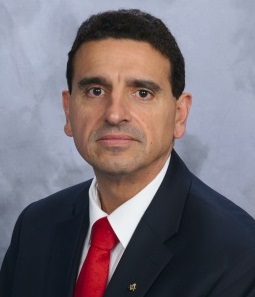 David Tamayo is an activist who strives to educate young Hispanics in the U.S. with the skills in critical thinking and the Constitutional ideals of Church State separation. He has BachelorÔÇÖs in Computers Science from GWU and a Masters in Management Information Technology from UVA. He is the organizer of the HAFree High School Outreach Mentor Program. Among other activities, he sponsors High SchoolsÔÇÖ Cybersecurity Teams to compete in the U.S.A.F. National CyberPatriot Competition, hosts the television Show ÔÇ£Road to ReasonÔÇØ, is member of Board of Directors (honorary) Humanistas Seculares de Puerto Rico, hosts of the Spanish-language HAFree podcast, is a member of the Speakers Bureau for the Secular Student Alliance and is currently working on a documentary film about U.S. Latinos and their beliefs. He is owned by Lexie, the oldest (15+) and healthy known St. Bernard dog in Northern Virginia.