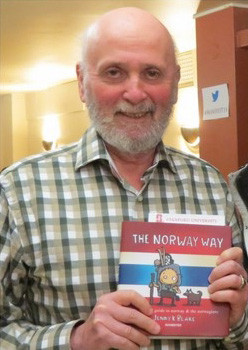 Jerry is Cofounder and Secretary/Treasurer of the Evolution Institute. ┬áPrior to the establishment of EI as a nonprofit in 2010, he served as President of the Humanists of Florida Association, which is affiliated with the American Humanist Association and was EIÔÇÖs initial umbrella organization. ┬áJerry received┬áhis PhD from New York University. ┬áBefore moving to Florida, he was a professor of Political Science for 25 years at Essex County College and at William Paterson University, both┬áin New Jersey. ┬áHe also founded the Urban Institute and served on several boards that impacted NJ higher education, as well as its electoral process.

Jerry presently┬áserves on the boards of the Secular Student Alliance, the Florida Consumer Action Network (FCAN), and Project Now Intergenerational Outreach, in addition to his work with SPI. ┬áHe has had extensive experience with political campaigning in the Democratic Party and with┬áprofessional consulting┬á(including for the Meadowland Chamber of Commerce). ┬áJerry┬áis passionate about teaching, research, and deep community engagement, and he has long been active in fundraising for political candidates and organizations that share his progressive values.