Science Report: Can We Transcend The Human Condition?

Home/Blog/Science Report: Can We Transcend The Human Condition?
Previous Next

Science Report: Can We Transcend The Human Condition? 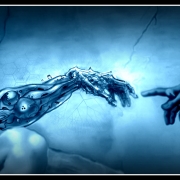 This author thinks so, and lists a number of outstanding new technological innovations that more than prove the case.

Transhumanism is the idea that human beings can and should transcend the limitations of the human body and mind. Obviously, such notions fly in the face of standard religious notions about the role of humanity in theological hierarchical structures. However, as the pace of innovation moves forward at an ever-increasing rate, even our most ardently conservative leaders have come to judge the merits of the work itself as much more critical to the evolution of our species than the means themselves.

New technologies like CRISPR gene editing have shown the incredible possibility of actually reducing human aging and its effects in real-time. Beyond even CRISPR, researchers at Harvard have begun exploring the possibility of synthesizing the human genome itself, creating new lifeforms of our own design.

Even more exciting technologies are in he works. Recently, a dancer and artist added a chip inside of her own arm that enables her to feel the seismic vibrations of every earthquake in the world – an experience that she transmits into her art.

The next phase of human evolution is beginning – and it starts with the revolution of the mind from religious structures first and foremost.1