Numbers: Is Bigotry Towards Muslims and Atheists Similar?

Home/Blog/Numbers: Is Bigotry Towards Muslims and Atheists Similar?
Previous Next

Numbers: Is Bigotry Towards Muslims and Atheists Similar?

The weekly report on the demographics of secularism
by Jordan Auburn 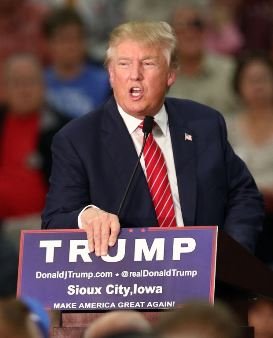 In the US presidential elections, as the Iowa caucus approaches, Donald Trump continues to cause a stir. On Monday 25th Jan, he even claimed he could shoot somebody and not lose voters. Perhaps his most provocative statement came last year when he declared he would implement a ÔÇ£complete shutdown of Muslims entering the USÔÇØ should he come to power.┬áWhat attitude do ordinary Americans hold towards Muslims, and how similar is it to their attitude towards atheists?

This 2015 YouGov poll┬ádemonstrated that 55% of the US public hold a ÔÇ£somewhat unfavourableÔÇØ or ÔÇ£very unfavourableÔÇØ opinion of the Islamic religion. This opinion was not bipartisan. The same poll found that only 43% of Democrats hold unfavourable views of Islam, while the Republican figure was 76%. Could this explain TrumpÔÇÖs increasingly high polling figures in Iowa, a more religiously conservative state than New Hampshire?

It’s important to differentiate between the criticism of Islam, the set of theological ideas and principles, and Muslims as a people. A secular society is neutral in theological matters, permits criticism of all doctrines, including religious ones. This is the essence of an evidence-based approach to critical thinking. For example, we would criticize the 91% of Iraqis who want Sharia law in their home country, and presumably a fraction of refugee from nearby Syria would have trouble respecting separation of church and state in the United States. On the other hand, the record of immigrants being assimilated into mainstream culture has proved successful in the United States much more so than in Europe.

Trump’s criticisms lacks such nuances, forming a blanket condemnation of all Muslim people. By creating a separate category for Muslims, he ignores that most immigrants from developing nations come from cultures with outdated social norms. By treating all Muslims as dangerous he ignores that vanishingly few immigrants pose security threats, and that fundamentalist Islam and different from mainstream Islam. It’s bigotry, which should be called out and acted upon. It is understandable that many are concerned about Trump’s marginalization of Muslims simply for their religious affiliation. 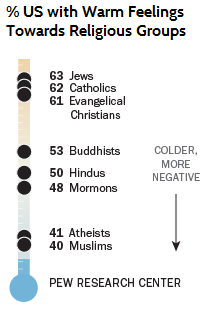 We should also use this opportunity to highlight an adjacent issue: the marginalization of AmericaÔÇÖs atheists. According to a Pew survey, atheists receive as ÔÇÿcoldÔÇÖ a feeling from the US public as do Muslims, with just 40% finding either group ‘warm’. Because┬áfour times as many atheists (4-5% of population) reside in the US as Muslims (1% of population), the problem is even bigger than PewÔÇÖs research suggests. For a nation that is constitutionally secular by nature, this is evidently a problem in need of redress.

TrumpÔÇÖs anti-Muslim approach, which has recently earned him the endorsement of evangelical leader Jerry Falwell Jr, is disturbing. We must protect the right and requirement to challenge all ideas, theological or otherwise. Perhaps Muslims and Atheists find themselves odd bedfellows with a similar problem, and could work together to eradicate religiously-orientated bigotry.