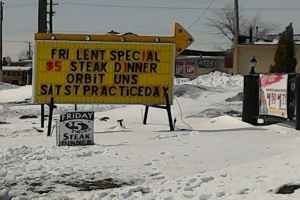 With the decline in religion throughout the U.S. and around the world, a new question is arising: should we keep up the holidays that we hold so dear? In this piece of original content, we’ll discuss the reasoning behind retaking the practice of one of the most nominal religious holidays – Lent – and why you should consider your festive expression as a representation of your own non-religious belief.

As pointed out by the author Vlad Chituk, there is little reason to disregard the cultural and historic importance of religious holidays – even as we disregard the religious structures that themselves support those festive traditions. Despite being one of the less popular religions, Lent represents a dose of healthy discipline into the sometimes overly consumption-driven lives of the general public.

A Catholic practice, Lent is “celebrated” for a handful of weeks, and is punctuated by a strict adherence to “Fish Fridays”, where practitioners avoid eating meat at least once a week, and are encouraged to suspend other habits they no longer want in their lives.

Discipline is a powerful force in a person’s life, and it goes without saying that we can all do with a little more of it. Top on the joyful celebration of Easter and Mardi Gras at the end of the Lent period – two religious holidays that have no doubt lost all former religious significance whatsoever – and we have a pudding that can be enjoyed by the world for the sheer non-religious benefits alone.

Partying Is Its Own Religion