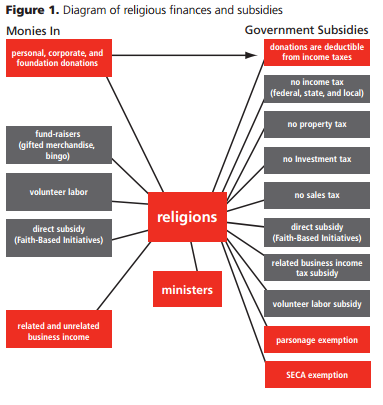 With all of the recent threat in the U.S. Legislative branch of another government shutdown, Congress is looking for ways to bring the budget into the black.┬á Republicans are insisting that defunding Planned Parenthood is a stellar way to do this.┬á Why?┬á Planned Parenthood is against their ideology.┬á They provide birth control, testing and yesÔÇªabortions for those in need of them.┬á Last year, Planned Parenthood received $528.4 million of federal money.┬á That is a lot of tax payer dollars going toward helping people that a portion of the population does not believe inÔÇª Could there be another cause that a significant number of Americans do not support taking and even greater amount of money yearly?

How about $71 billion?┬á That makes Planned ParenthoodÔÇÖs funding look like mere peanuts, yet such income is lost every year and the cost passed on to the tax payer.┬á How so? ┬áReligious organizations.┬á If religious organizations (ie. churches, synagogues, mosques, etc.) ┬áwere taxed like for-profit agencies, it was found that this could generate upwards of $71 billion per year in tax revenue.┬á Even if churches were merely held to the standards of other non-profit agencies, this could generate $16.75 billion in tax revenue per year.┬á Here comes in the notion of bias, it is arguable that no member of Congress has ever been to a Planned Parenthood clinic.┬á Though, the Hill is overwhelmingly populated with theists, with only one member unaffiliated. 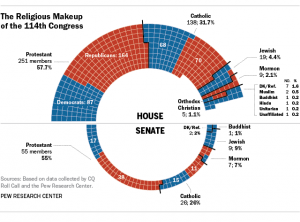 contraception, including surgical sterilization.┬á According to a Pew Forum survey, 31.7% of the House and 26% of the Senate are Catholic.┬á Catholics are an outspoken group opposed to contraception.┬á Looking at the numbers, one could draw the conclusion that conservatives pushing for the defunding of Planned Parenthood are attempting to legislate morality.

It is noted that religious organizations┬áfall into the category of ÔÇÿcharitableÔÇÖ entities. This is often a stretch. Secular Humanism published a report entitled, How Secular Humanists (and Everyone Else) Subsidize Religion in the United States. ┬áThis report will be the highlight of this article.

The researchers calculated the Mormon Church, for example, spends roughly .7% of its annual income on charity. Their study of 271 congregations found an average of 71% of revenues going to ÔÇÿoperating expenses,ÔÇÖ while help to the poor is somewhere within the remaining 29%. Compare this to the American Red Cross, which uses 92.1% of revenues for physical assistance and just 7.9% on operating expenses.┬áThe authors also note that┬áWal-Mart, for instance, gives about $1.75 billion in food aid to charities each year, or twenty-eight times all of the money allotted for charity by the United Methodist Church and almost double what the LDS Church has given in the last twenty-five years.

Which brings us to the second category of giving, or ÔÇÿspiritual charities.ÔÇÖ Unfortunately, religious organizations┬ádo not meet the requirement of a charitable organization for tax purposes. HereÔÇÖs why: a religious organization’s┬áemployees pay taxes on their salaries (although clergy get a handful of write-offs that non clergy cannot, including their physical living expenses). Therefore, when they are doing things like praying for godÔÇÖs intervention or to heal sick children, that’s not charity; thatÔÇÖs doing what they are paid to do.

ÔÇ£. . . The Church of Jesus Christ of Latter-day Saints (the LDS or Mormon Church) . . . gave about $1 billion to charitable causes between 1985 and 2008. That may seem like a lot until you divide it by the twenty-three-year time span and realize this church is only donating about 0.7 percent of its annual income.ÔÇØ

Do religions engage in charitable work that addresses the physical needs of the poor? Many do, but that is not their primary focus. Religions are quick to advertise when they do charitable workÔÇöironically for Christians, since the Bible explicitly says not to.┬á In Matthew 6:2 it states:┬á So when you give to the needy, do not announce it with trumpets, as the hypocrites do in the synagogues and on the streets, to be honored by others. However, they donÔÇÖt do as much charitable work as a lot of people think, and they spend a relatively small percentage.

Why? Charity is the giving of something, not the exchange of something for something else. When religions give, whether it be money, clothing, labor, building materials, etc. to address the physical needs of the poor; they are giving without receiving payment in return. There is no exchange of goods or services. Yes, those giving may feel good about what theyÔÇÖve done, but that feeling is not given to them by the recipients of their charitable actions in exchange for the actions; it rather results from the charitable actions themselves. 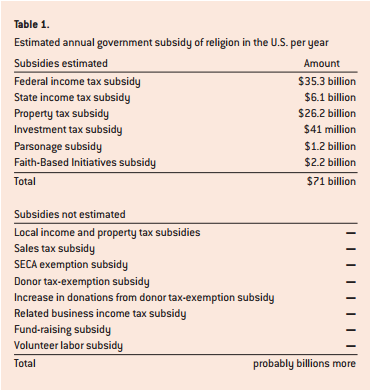 In contrast, when a pastor preaches a sermon or a priest performs a baptism, this is done out of obligation and is what these religious functionaries are paid to do. It is no more ÔÇ£charityÔÇØ than a doctor performing a surgery to save a life or a social worker intervening in an abusive family situation. If the people you are helping are paying you to help them, itÔÇÖs not charity; itÔÇÖs labor. You may like your job and feel that it offers value beyond what you receive in compensation, but that doesnÔÇÖt change the fundamental nature of the exchange taking place. In short, if someone is paid to address spiritual concerns, it is not charity when they do so.

For those individuals who argue that religions should receive subsidies because of their charitable work, there is an easy solution for that problem. If religions want to engage in charitable work, they should separate religious activities and finances from their charitable activities and finances. The charities run by religions could be tax-exempt, but the religious organizations would be treated like civic leagues or sports clubs or any other volunteer organization that exists for entertainment or the benefit of its members. Those groups are not tax-exempt and are not subsidized by the government.┬á It is clear that these organizations are not as charitable as the image they project.