To hand a church money on the premise to perform a service, but to do so without imparting their faith-based initiative is like taking your pet goldfish out of its bowl and commanding it breathe room air.┬á To the goldfishÔÇÖs credit, at least it is incapable of understanding your instructionsÔÇª

It is the nature of the organization, churches spread the word of whatever text they believe in.┬á This is the very reason that the U.S. government does not contract them for service, except they do.┬á Despite the existence of hundreds of thousands of secular non-profit organizations in the United States, and more that would be created by funding, American faith-based organizations (FBOs) receive $210 billion each year from federal and states sources to provide services with the assumption that they will not proselytize or discriminate.┬á An original, SPI Report titled, Abuse in the Faith-Based and Community Initiative delves into this issue. 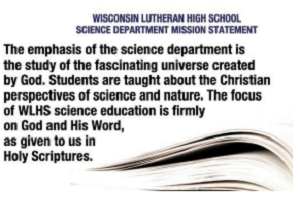 Why are these faith-based organizations being used?┬á Think of these organizations as independent contractors, the government has farmed out various needs and services to these contractors instead of keeping them in house.┬á Now, extend this metaphor into something like construction.┬á Anyone who has built a house or had any type of major repair done to their home will have asked themselves this question: will the lowest bidding contractor do the best job?

IÔÇÖm not saying that a book like the Christian Bible is completely devoid, it is full of colorful imagery like many works of fiction.┬á Take for instance Matthew 7:26, ÔÇ£ÔÇªa foolish man who built his house on sand.ÔÇØ┬á The parable comparing building on a solid foundation rather than a weak one.┬á Today, we know that a solid foundation of knowledge-not superstition-is the key to success.┬á Said foundation begins in the classroom.

Public schools are banned by law from teaching religious viewpoints, but private organizations that donÔÇÖt take government money may teach and say anything. They can even indoctrinate students in debate tactics to reject science. Now a loophole exists for private schools to receive government funds. Through AmericaÔÇÖs school voucher program and tax-credit scholarships, taxpayers in 11 states now find themselves spending nearly $1 billion per year for 250,000 students to attend private schools, most of which are religious and will teach a small or large portion of religiously motivated untruths.9 For example, in North Carolina, 90% of voucher schools are religious.

These private schools teach things like the earth is only 6,000 years old, that embarrassing parts of US history never 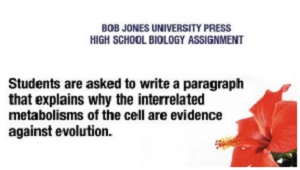 happened,┬á stories such as NoahÔÇÖs Ark and Genesis are HISTORICAL fact, climate change/collapse is a lie or not caused by humans, psychology comes from the soul and that the Bible is a historical text.┬á In 11 states, these lies are being funded by taxpayer dollars.┬á US Supreme Court ruled in 2002 that school vouchers were legal even when supporting religious education

A 2011 survey of 900 public high school biology teachers found 28% teaching only evolution; 59% teaching evolution, albeit cautiously for fear of litigation or unwilling to admit teaching creationism; and 13% not teaching evolution, teaching creationism instead. Even in states without an explicit creationist agenda, fear prevents a less thorough teaching of evolution. Some teach evolution but confide to students that they are only doing it because the state forces them to, not because itÔÇÖs factual.┬á This can lead to lack luster instruction.

Hundreds of schools manage to utilize government funds to impart religious theology into the minds of children. In 26 states, legislatures are considering new voucher programs or expanding old ones. A 2013 partial study of select US states discovered 300 voucher school websites that are blatant enough to openly advertise instruction of creationism on their websites, surely a sign that they are just the tip of a very large iceberg.

This is not an issue reserved only to Christian schools.┬á New York authorized $125 million for computers for private schools, most of which are religious, including $38 million for Jewish schools, through the Smart Schools Bond Act of 2014. ┬áThe biggest recipient of the $10.8 million school voucher program in North Carolina is the Greensboro Islamic Academy. 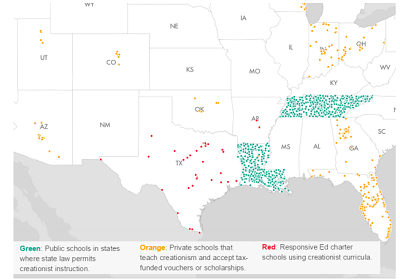 Why should we care?┬á After all, the average school year is 180 days, so even 2 days of creationist instruction would only make up 1% of a studentÔÇÖs class-time.┬á The issue is that tax payers come from a diverse range of religions or have no religion at all.┬á The U.S. ConstitutionÔÇÖs Establishment Clause states that the government shall not endorse any religion. ┬áCreationist schools break down trust in the entire scientific process by doubting scientific consensus, and replacing ÔÇ£scienceÔÇØ with ÔÇ£Bible scienceÔÇØ. Science isnÔÇÖt just useful for constructing functioning computers and airplanes that fly. Critical thinking should be respected. Stifling critical leads to poor choices and enormous human suffering.

Further, schools that teach creationism permit a plethora of misinformation in their classrooms including, but not limited to the following:

Taxpayers who are secular or hold differing religious views should not be forced to fund these schools.┬á To fairly accommodate everyone, the only option is secularism- the separation of church and state.