Home/Blog/Secular Injustice in Bangladesh
Previous Next

This week a postgraduate law student, Nazimuddin Samad ┬áwas killed in Bangladesh in a machete attack. 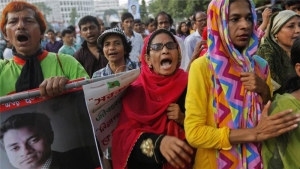 As the news broke, much work was done┬áto understand what had happened. Media contacts worked to establish Nazim’s connections to the Bangla secularist community and translate some of his social media posts, so that we could build a picture of the range of his interests.

These interests included human rights, secularism, the war crimes trials, he made atheist and feminist criticism of religion, and stood up for minority rights and victims of sexual and religious attacks. He was a humanist, an activist, a politically-engaged student in the prime of life.

He was not the first to be murdered under grisly circumstances recently in Bangladesh. At least seven others have perished at the hands of religious extremists, who view the atheists’ views as both blasphemous and insulting.

A banned group in Bangladesh linked to al-Qaeda has claimed responsibility for the murder.